I will revel in God’s love and gifts! 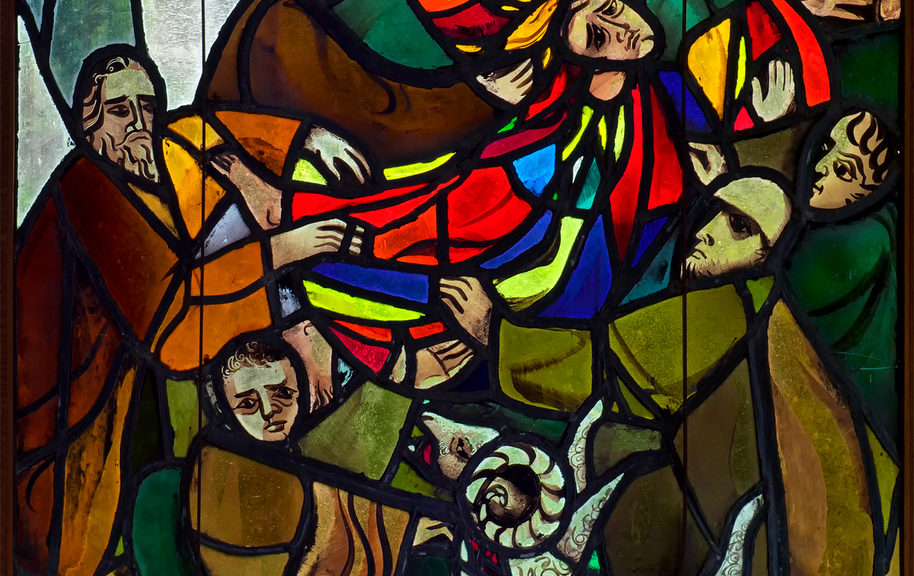 Once God finishes forming the universe, the Book of Genesis focuses almost entirely on envy.

Humans are, from the beginning, envious of God’s powers, as shown in Adam and Eve’s desire for the fruit of the tree of the knowledge of good and evil.

Human’s are envious of what they mistakenly believe to be God’s preferential treatment of one human over another, as in the story of Cain and Abel.

Cain believes that God has not liked his offering as much as he likes Abel’s , despite the fact that God attempts to explain to him that the problem is not with the offering but within his heart, saying “sin is crouching at your door; it desires to have you, but you must rule over it”.

When Abram and Sarai travel to Egypt, Abram knows he will be killed by envious men because his wife is beautiful.

Abram seems to be the first biblical personage to recognise envy for the destructive force it is and to act to prevent it. When he and his nephew Lot begin to compete over land, he sees the danger immediately and suggests a solution that will save them both from further envy.

However, Abram does not seem to foresee or prevent the envy of Sarai for Hagar once Hagar gives birth to Ishmael.

Sibling rivalry is promoted by the parents of Jacob and Esau. Isaac, who had a taste for wild game, loved Esau, but Rebekah loved Jacob. Jacob’s envy prompts him to steal both his brother’s birthright and his blessing from Isaac.

Esau’s resentment of the thefts prompt him to threaten to kill Jacob, causing Jacob to flee his home.

Isaac recognises the potential for sexual envy, just as Abraham did, when he stays in Gerar. Here he tells his wife Rebekah to pretend she is his sister so he will not be killed.
He also recognises the danger of property envy when he digs wells and the herders of Gerar demand that they are theirs. He does not fight them, he simply moves on.

So Isaac, like Abraham, is able both to recognise the dangers of envy and to find a workable solution for it.
Eventually he also makes peace with his brother Esau, negating that man’s envious rage too.

Sibling rivalry is also apparent when the sisters Leah and Rachel compete for the love of Jacob. When Rachel saw that she was not bearing Jacob any children, she became envious of her sister. Leah.

After 20 years of faithful service to Laban, Jacob inspires Laban’s son’s envy with his success in breeding a bigger and stronger flock. Eventually Jacob and Laban resolve the issue of the envy by making a pact.

Yet Jacob’s desire for peace is not passed on to his sons. After the rape of their sister, Dinah, they resolve the issue with battle and bloodshed.

Jacob’s sons are so envious of their father’s preferential treatment of Joseph that they effectively sell him into slavery.
Joseph suffers greatly from the envsy of others. First his brothers, then Potiphar’s wife, and so on it goes.

The envy of sibling rivalry, started by the parents and grandparents occurs yet again when Jacob blesses two or Jacob’s sons, Ephraim and Manasseh, giving the firstborn blessing intentionally to the younger boy.

Is envy the fatal flaw of humans and the real meaning of “the fall”?

NOTE:  It has been brought to my attention that it may be a mistake is to think of “jealousy” and “envy” as synonyms.
A little linguistic research tells me that they are not.
It seems that the more traditional definition of “jealous” is “fiercely protective of one’s rights or possessions”, whereas the definition of “envy” is “desire for something belonging to someone else”.
So, when God says he is jealous, he means that he is fiercely protective of his rights, his creation and of course, his people.
However, when Genesis characters behave in dubious ways as outlined above, it would be more correct to say they are envious, wanting something that is not rightfully their own.
I have edited the first draft to replace “jealousy” with “envy” and I thank those who pointed this out. 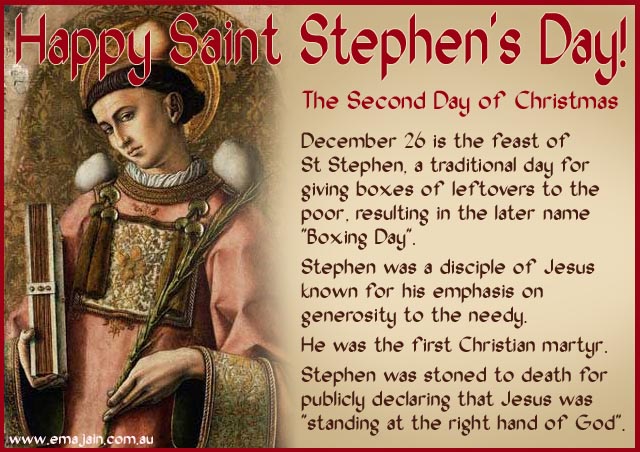 The Second Day of Christmas is December 26.
The feast of St Stephen, a traditional day for giving boxes of leftovers to the poor, resulting in the later name “Boxing Day”. Stephen was a disciple of Jesus known for his emphasis on generosity to the needy. He was the first Christian martyr. Stephen was stoned to death for publicly declaring that Jesus was “standing at the right hand of God”. 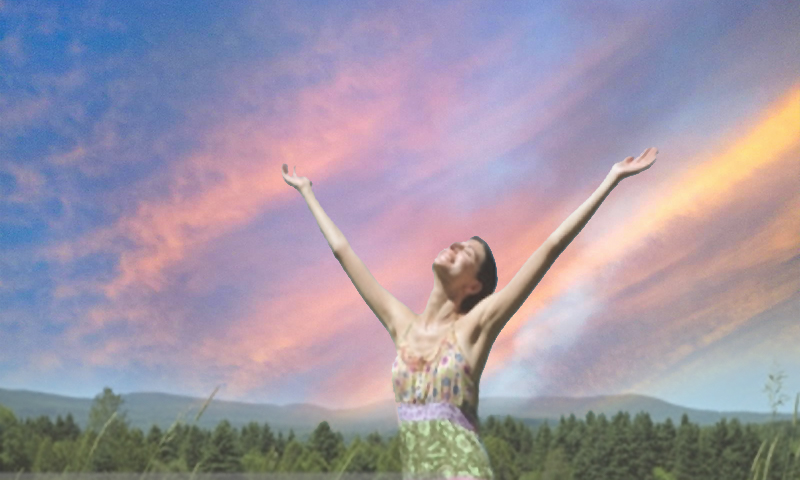 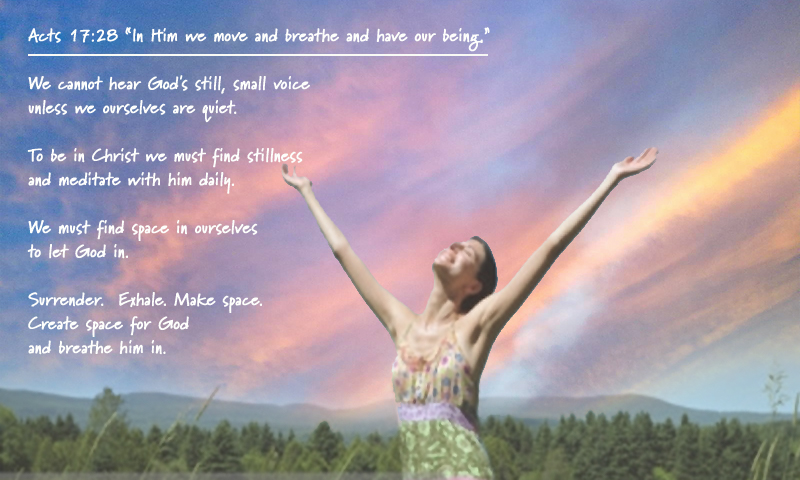 We cannot hear God’s still, small voice
unless we ourselves are quiet.

To be in Christ we must find stillness
and meditate with him daily.

We must find space in ourselves
to let God in.

Surrender. Exhale. Make space.
Create space for God
and breathe him in.

“No-one puts children in a boat, unless the water is safer than the land”(1)
No-one risks their own child’s life.  Is this so hard to understand?

Can you imagine what it takes, to make the choice to flee?
When the life you know is blown apart, and you face the perilous sea?

When the hand of the tiny child you grip, seems slippery in your own?
Cries “too tight , you are hurting me!”,  but you will not let it go.

This tiny life, this enormous love, that trusts in you to know,
What’s right to do, when’s right to leave, and where on this earth to go?

Stop
Think
Can you imagine?

May we all be aware of the desire for peace

In East and West, in North and South.

May peace abide among us, in every heart

In people, communities, and in nations.

This is our earnest prayer.

May peace be unto all!

Time to step outside of linear time
Time that fools allow to trap their minds
Thinking time a path, when it’s a sphere
Of spheres, within and without
And around and around and all about
Flowing in all directions
turning in and back on itself.
For time is light
Composed of photons
Being created eternally
And it BOUNCES.
Everything occurs at everywhen
But we imperfect creatures
cannot experience it all at once
We cannot cope,
so we view, at light speed only
Oh, so very slow.

This Christmas, if you are going to post “Keep Christ in Christmas!” please, first make sure you are personally keeping Christ in every other day of the year (you know the stuff: caring for the poor, protecting the marginalized, alleviating suffering, shunning greed, championing equality), so you don’t look like a hypocrite.

Be your own true reflection.
Blurriness is dull.

Like being on a roundabout that you just can’t get off.

The worries, hurts and troubles of life cycle around, but remain the same.

At some point you must break the cycle.

You must choose the “sinister” left.

Sinister is only an impression in your mind. It may be real or unreal.

We call it sinister because we feel it is ominous, and our minds anticipate bad results.

But if you want to get off the roundabout, you must go left at some time.  You must choose the sinister and see what happens.

The journey must go on.